New technologies represent a set of highly sophisticated power that can either make or break not just a single company, but the whole industry. This disruption paradigm is freighting for many leaders, especially those who lead companies operating in innovation static industries which historically did not entail them to think and act as disruption agents. A good example of such occurrence is banking, an industry that now dictates its leaders to understand blockchain, the underlying technology of cryptocurrencies such as Bitcoin. Another great example is the taxi industry which, before the arrival of Uber, experienced the last major disruption when cars replaced horses.

THE GOAL OF THIS ARTICLE is to show non-tech savvy leaders how to easily understand and brainstorm about new and enhanced business collaborations enabled by blockchain. More specifically, how to transform partner relationships by way of transparency, integrity and automatization. To achieve that, the beginning of the article shortly explains the relevant blockchain aspects. The technology-oriented beginning is followed by the introduction of The Magic Triangle, a framework which allows the reader to relate blockchain technology to a specific business context. Lastly, the article presents two innovate scenarios which serve for initial inspiration.

First of all, blockchain is not Bitcoin. Second of all, blockchain comes in distinct varieties. For the purpose of this article it is important to separate between public and enterprise blockchain. The public variety such as the one powering Bitcoin allows everyone to participate in the system whereas the Enterprise variety (E.g. Participants: Car manufacturer and tier 1,2,3 suppliers) allows for limiting the access to only desired entities. This article concerns only the Enterprise edition.

Simply put, blockchain is nothing more and nothing less then a computer program that writes down desired digital information such as size, temperature, time, amount, source on several computers while at the same time allowing all the participants to view the information in a shared ledger. Bear in mind, captured information has to be digital and preferably written into the system automatically, leaving out a possibility for human to corrupt the data. Once the data is captured and written into the blockchain ledger, the blockchain system does not allow for any data modification. Thus, key blockchain value points are:

Resolute Integrity stemming from the impossibility of data corruption once the data is written into the system.

Transparency as all the participants see the same data at all times.

Since blockchain is a new technology we are far from the point of uncovering all the relevant use cases. Thus, by experimenting with blockchain you might become the first-mover in your industry! This fact provides for a fair share of uncertainty, but even more so, it provides a great opportunity for companies that are bold enough to experiment with this disruptive technology.

Enabled by technological advancements, globalization is pushing every company to compete on a global level. This is a fact that many companies fully exploited to change, create and lead new industries. Good, known examples of such companies include Uber, Airbnb and Netfilx. Such innovative companies wiped out several traditional companies like Kodak and Compaq which thrived for years but failed miserably when they needed to transform.

To easily comprehend how a technology implicates a business model I below outline The Magic Triangle framework. 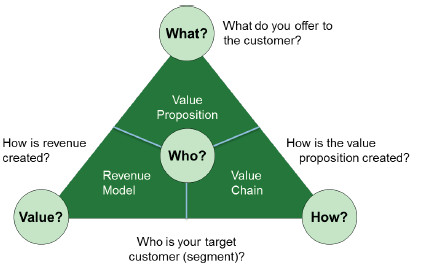 Now that we have covered how the blockchain works and we are acquainted with how The Magic Triangle aids in understanding technology implications, it is time to put the knowledge to practice. Depending on the use case, blockchain can affect any number of dimensions composing the Magic Triangle. As mentioned before, key blockchain value points stem from data integrity, transparency and process efficiency. Blockchain is due to this fact highly disruptive in both, vertical and horizonal collaborations.

Since describing all the blockchain enabled business models would be impossible, I below describe two highly relevant use cases which you can try to replicate in your own business environment. More relevant use cases can be found by following the links provided at the end of the article.

Track-and-trace is not a new supply chain system, but track-and-trace that does not allow for data corruption is! Some industries such as the food and beverage are experiencing high consumer distrust when it comes to product origin. Blockchain tackles this very aspect as it allows all the buying parties to benefit from intact product information. To put it in example, a wholesaler buys vegetables from a farm, sells them to retailer who finally sells them to the end consumer. Due to the blockchain technology, the end consumer buying a vegetable can trace the vegetables’ path all the way back to the farm which produced it. Moreover, he can rest assured about product age and handling, which commenced at the farm and ended on the shop shelf.

So how does this implicate a business model? Looking through The Magic Triangle lens we can uncover benefits arising in 3 out of 4 dimensions:

Who – the customer segment stays the same.

How – value is created through an efficient data collection and distribution.

What – entities involved benefit from increased certainty arising from intact data. Based on it, wholesalers and retailers can better plan supply, asses the product quality and adjust pricing. Further downstream, the end customer benefits from origin, handling and quality assurance.

Value – additional revenue is charged due to the willingness to share intact data. In addition, B2B and/or B2C price can be automatically set based on the specification of intact data. E.g. Price of the vegetable automatically decreases with every past day.

While shipping goods from A to B may seem like a straightforward process, anyone working in logistics knows that just about anything from cargo damage to port delays, package loss, pirate attacks, etc. can get in the way of success. To insure their business, shipping companies make complex insurance deals, which ideally fully or at least partially mitigate risk. Insurance companies all too often charge risk premium that does not reflect the actual risk. To tackle this issue Maersk decided to implement blockchain technology, which gathers relevant data such as cargo temperature, ship flag changes, etc. Based on this intact, automatically gathered data, insurance companies are able to optimize insurance offerings and even automatize contracts with the shipping companies.

Looking through the The Magic Triangle lens we can identify the following impact:

Who – the target customer segment stays the same.

How – insurance related processes get optimized and in some cases even automated, allowing Maersk to relocate and/or free up resources. IT becomes a primary activity in handling insurance processes.

What – on the verical side, Maersk can optimize prices towards their consumers who are offered a precise justification of the price they are paying. On the horisontal side, partnerships with insurance companies would due to better, more transparent collaboration deepen.

Value – Revenue stream stays the same as Maersk continues to primarily earn money from selling shipping services. On the flip side, costs would decrease as the company would optimize insurance payments and processes.

In a nutshell, blockchain is a powerful technology that is by far not limited only to the use cases described in this article. As other technologies in the adoption stage, blockchain will also award first-movers, companies that are comfortable in dealing with uncertainty which is at this stage an unavoidable aspect accompanying blockchain. Hopefully this article boosted your inspiration and generated at least a few ideas about how to enhance your company’s collaborations. If that is the case, I highly recommend checking the links below as they will aid you in taking your knowledge to a higher level.

2 thoughts on “Evaluating blockchain enabled collaborations against your company setup” 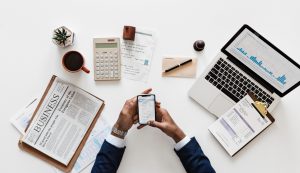